The sea is a constant source of inspiration here as we have stunning stretches of beautiful beaches and coastline to enjoy.
The Atlantic ocean is completely different to the Irish Sea on the East coast of Ireland where I grew up. It is wild, cold, often dangerous and always beautiful compared to the temperate waters of the East coast.
I have done a number of sea paintings on paper with paint, ink and chalk, to give the effect of the waves. Here are two examples below; 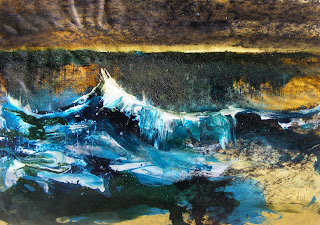 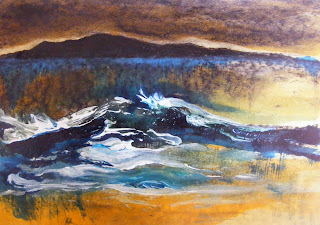 I was thinking about Japanese sea prints when I was doing these. The famous one below is called 'The Waves at Kanagawa' by Hokusai. It is part of a large collection of Japanese prints in the Blackburn Museum in Lancashire in England. 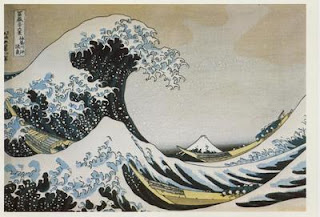 Hokusai (1760-1849) is possibly Japan's best known artist but this image is not at all typical of what was being done at the time. Traditional Japanese art would not have painted the lower class fisherman, seen here riding the waves in their boats. Neither would they have been concerned with perspective, used here to show Mount Fuji in the distance. Hokusai was influenced by Dutch landscapes of the time and his unique use of colour and flattening of images went on to influence Western art. European artists such as Van Gogh, Manet and Degas would have studied this style and made elements of it their own.
In my paintings, I imitated the use of perspective by making the waves the focus in the foreground and and suggesting a typical Irish island shape in the background. 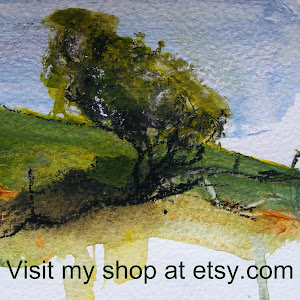 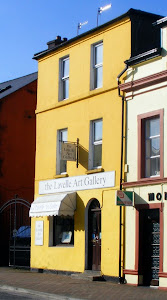